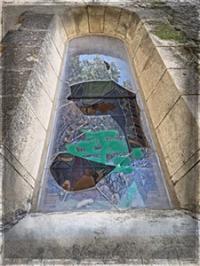 'Destruction' is part of the 'Apps uncovered' series of iphoneographycentral.com.

Topic: 'What's Your Point of View?'

Backstory by Vanessa Vox: 'My photo called ‘Destruction’ is not meant to be a glorification of decay. The shards and fragments of the leaded window are rather witnesses of a stupid act of boredom, unmotivated aggression and disrespect. The small chapel was built around 1900 by Jean-Pierre Léopold Urdy, a country doctor...' 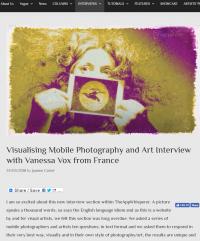 by Joanne Carter from theappwhisperer.

Ten questions are answered visually with own works created on a mobile device:

'How Would You Describe Your Mobile Art?',

'What Does Mobile Art Mean To You?',

'What Are Your Aspirations?'... 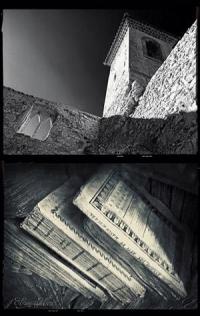 'Open Window' and 'Old Books' are part of the 'Apps uncovered' series of iphoneographycentral.com. Selected by Trish Korous

'Open Window: The special character of a ruin is that the interior space of a past time slowly transforms into an outer space. This little church in the south of France has lost its roof over the centuries. On the photo you only see a majestic tower and an abandoned wall with an open window. I stood in the shadow of this wall. A shadow which reminds me of the dark nave. The strongly illuminated tower and the window are witness to the rising sun behind the wall. When I took the pic my eyes were caught by the light. The B&W Hipstamatic combo (Scott S, Blackeys IR) finally emphasized the high contrast light scenario.'

'Old Books: Visible traces of time and decay. We look at dense rows of old books in a overfilled castle library. This is a monochrome snapshot from the hip. I tried to accentuate the ancient character as well as the fragile feel of old paper. 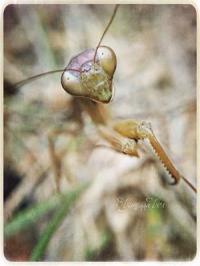 'Mantis (4)' is part of the 'Apps uncovered' series of iphoneographycentral.com.

Backstory by Vanessa Vox: 'What could be more exciting as to sit in the grass face to face with an alien? The mantis has a stereoscopic vision and a small black dot on each eye which is moving. It feels like a close encounter.
I used an Olloclip macro lens on my iPhone. Then I spoke softly to my model, “You are a fascinating creature. Very photogenic!” This conversation lets me forget the challenge to get a sharp shot. The depth of field of a macro lens is extremely small and as everybody knows insects are moving very unpredictably. At the end, I was quite happy that my patience and the patience of the mantis succeeded. Whew… I’ve got my photo series.'

Two of my photos are part of the 'Apps uncovered' series of iphoneographycentral.com

'Early Winter in the Drôme Provençale: I just walked out of the village shop as this cute snowman looked at me intensely, like saying: ‘Please hurry! Get out your iphone cam, I’m afraid I will melt soon looking at you!’. Wow! What a charming young fellow!' (Vanessa Vox)

'Ready For a Walk: Once upon a time there was a noble and friendly grandma, a big pink pig and a tiny black-white piglet… A colorful and imaginative scene rised up in my mind and the story began to weave. It was one of those grey and melancolic days at the end of november.
I’ve shot this pic on a flea market in the south of France. Little me was immediately caught by the expression of the figures as well as by the various structures of materials: the old untreated wood of the basket, the varnished wood of a homemade board game, the autumn leaves on the weathered cement steps.' 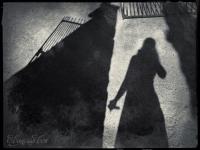 'Shadows Alive (35)' is part of the 'Apps uncovered' series of iphoneographycentral.com.

Backstory by Vanessa Vox: 'I live in a region where the sun dominates the scene very often. Sometimes there is too much brightness and I am longing for the night when the big shadow overwhelms the landscape.
But also during the day when the sun is behind my back, I keep an eye on all these moving shadows which appear here and there and follow me on old stone walls and streets. They seem to tell me stories about another life beyond the daily routine. They tell stories about things happening in another world.
I remember that I was always fascinated by early German expressionistic movies. They played with shadows to create a surreal vision somewhere between reality and human fears. But in my series 'Shadows alive' there is more than fear. There are also dancing bodies and stories of corresponding souls. And sometimes the shadows communicate with the real world and the real things. But what is real?' 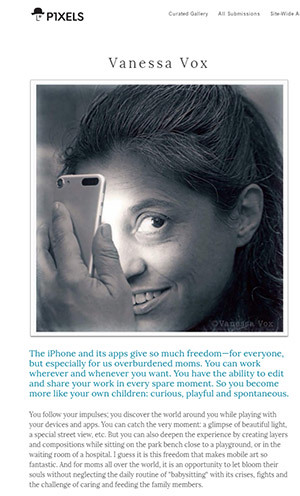 Vanessa Vox amongs other artists in p1xels.com:'How The iPhone Gave Art Back To Mothers, Part 3'

'The iPhone and its apps give so much freedom—for everyone, but especially for us overburdened moms. You can work wherever and whenever you want. You have the ability to edit and share your work in every spare moment. So you become more like your own children: curious, playful and spontaneous. You follow your impulses, you discover the world around you while playing with your devices and apps. You can catch the very moment: a glimpse of beautiful light, a special street view, etc...' (Vanessa Vox) 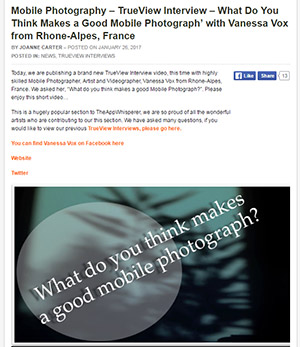 Mobile Photography – TrueView Interview – What Do You Think Makes a Good Mobile Photograph’ with Vanessa Vox from Rhone-Alpes, France, posted in theappwhisperer.com by Joanne Carter

'Today, we are publishing a brand new TrueView Interview video, this time with highly skilled Mobile Photographer, Artist and Videographer, Vanessa Vox from Rhone-Alpes, France. We asked her, “What do you think makes a good Mobile Photograph?”... (Joanne Carter) 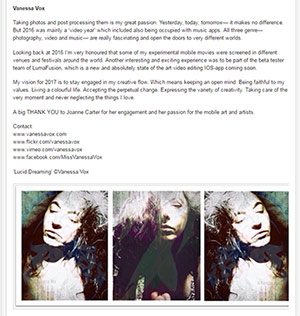 Mobile Photography / Art New Year Resolutions 2017 From Around The World

'Taking photos and post processing them is my great passion. Yesterday, today, tomorrow— it makes no difference. But 2016 was mainly a ‘video year’ which included also being occupied with music apps. All three genre— photography, video and music— are really fascinating and open the doors to very different worlds.

Looking back at 2016 I’m very honoured that some of my experimental mobile movies were screened in different venues and festivals around the world. Another interesting and exciting experience was to be part of the beta tester team of LumaFusion, which is a new and absolutely state of the art video editing IOS-app coming soon.

My vision for 2017 is to stay engaged in my creative flow. Which means keeping an open mind. Being faithful to my values. Living a colourful life. Accepting the perpetual change. Expressing the variety of creativity. Taking care of the very moment and never neglecting the things I love' (written by Vanessa Vox)

A new portfolio of mobile photographers and mobile artists 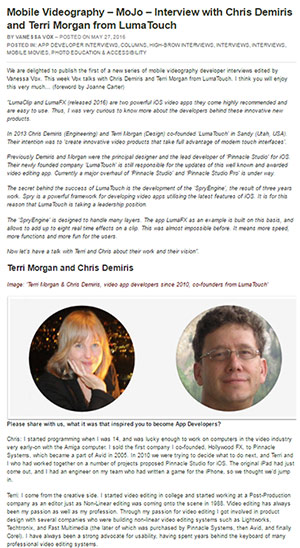 'LumaClip and LumaFX (released 2016) are two powerful iOS video apps they come highly recommended and are easy to use. Thus, I was very curious to know more about the developers behind these innovative new products. 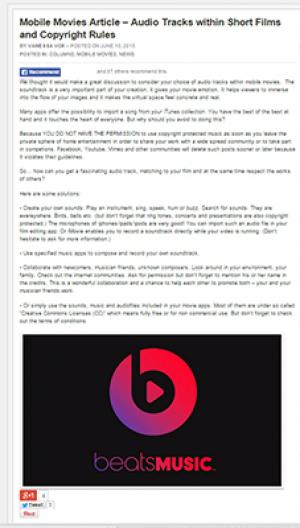 'We thought it would make a great discussion to consider your choice of audio tracks within mobile movies.  The soundtrack is a very important part of your creation, it gives your movie emotion. It helps viewers to immerse into the flow of your images and it makes the virtual space feel concrete and real...' 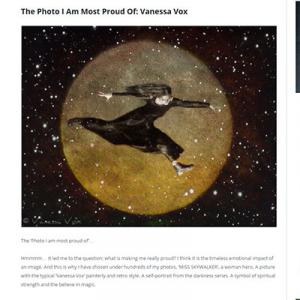 'Photo I am Most Proud Of:

'Vanessa’s work is a combination of self portraits, abstract montages and Hipstamatic style street images. For me it is images like ‘Shadows Alive 2’, ‘Spread Your Wings’ and ‘Me and My Porcelain Bird’ that are classic examples of Vanessa’s unique style of mobile photography' 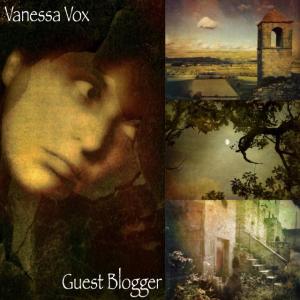 "She has a very unique

Her work includes self portraits and landscapes.

What her work reminds of

are Biblical Storytelling and Folklore.

The images are filled with very vivid details 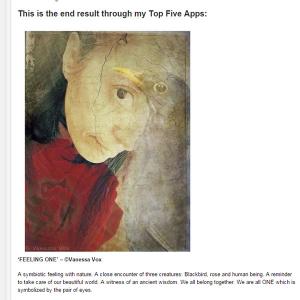 with my photo 'Feeling one'

'A symbiotic feeling with nature. A close encounter of three creatures: Blackbird, rose and human being. A reminder to take care of our beautiful world. A witness of an ancient wisdom. We all belong together. We are all ONE which is symbolized by the pair of eyes' 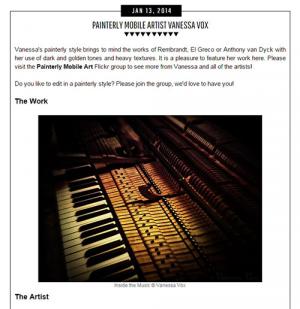 the works of Rembrandt,

with her use of dark and golden tones 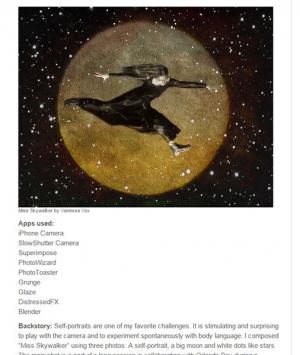 artfully conveys with a self-portrait

a sense of strength and self-confidence.

For me, this image suggests that there’s a natural tension

between reality and dream (aspiration?)

and that this is a positive and necessary aspect of life'